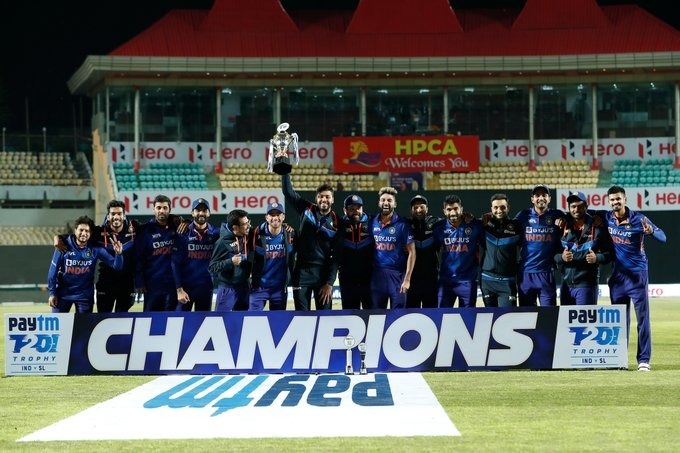 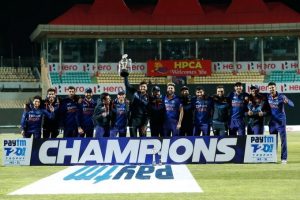 Dharamsala, Feb 28 Dasun Shanaka’s fighting fifty went in vain as Sheyas Iyer smashed his third consecutive half-century (73 not out off 45) and helped India thrash Sri Lanka by six wickets in the third and final T20I to complete the 3-0 clean sweep, at the picturesque HPCA Stadium, here on Sunday.

It was India’s 12th successive T20I win, the joint-longest winning streak for a full member and their seventh series win on the trot at home in this format.

With this win, they also completed their third successive 3-0 sweep of a series in the shortest format of the game. Under Rohit Sharma captaincy, India registered a 3-0 win over New Zealand at home last year and they thrashed West Indies 3-0 earlier this month to go to the top spot of ICC T20I Rankings. And with the sweep of Sri Lanka, India are set to retain the numero uno position.

After winning the toss and opting to bat first, a courageous fifty from skipper Dasun Shanaka helped Sri Lanka post 146/5 in 20 overs. The likes of Avesh Khan (2/23), Mohammed Siraj (1/22), Harshal Patel (1/29), Ravi Bishnoi (1/32) picked wickets at regular intervals to keep Sri Lanka on the backfoot before Shanaka played a solid knock to help his team post a fighting total.

Chasing a challenging total, India were off to a poor start as Dushmantha Chameera dismissed Rohit Sharma (5) in the second over of the innings. Sheyas Iyer then joined make-shift opener Sanju Samson at the crease and kept the scoreboard moving at a brisk pace from the word go.

Samson looked good during his short stay at the crease before he edged Chamika Karunaratne behind for a 12-ball 18. It was Deepak Hooda who promoted at No 4 and he hit 21 off 16 before getting dismissed by Lahiru Kumara.

Despite losing partners frequently, Iyer never took the foot off the pedal, punishing the Sri Lanka bowlers every time they missed the mark even by a whisker and his half-century came off only 29 balls.

Venkatesh Iyer (5) who batted at No 5 got out cheaply but Shreyas and Ravindra Jadeja ensured that India didn’t lose any more wickets. In the end, Shreyas and Jadeja (22 not out off 15) remained not out as India sealed yet another comfortable run-chase, scurrying past Sri Lanka’s total of 146/5 with 3.1 overs to spare. Overall, Shreyas remained unbeaten in three matches and finished with 204 runs in the series, decimating Sri Lanka single-handedly with the bat in the series.

Earlier, Sri Lanka were off to a terrible start, losing the wickets of Danushka Gunathilaka (0), Pathum Nissanka (1) and Charith Asalanka (4) inside the powerplay and scoring just 18 runs.

Mohammed Siraj gave India first breakthrough in the very first over of the match, removing Gunathilaka, who dragged on a ball to his stumps. Avesh Khan got rid of Pathum Nissanka in the next over, to get his first international wicket and then he dismissed Asalanka to leave Sri Lanka in deep trouble.

Janith Liyanage and Dinesh Chandimal then looked to rebuild Sri Lanka’s innings and had a brief stand of 18 runs for the 4th wicket between them. However, Rohit introduced Bishnoi into the attack and he delivered straightaway by removing Liyanage, who couldn’t read the googly and was bowled, leaving visitors at 29/4 after 8.3 overs.

By taking wickets at regular intervals, Indian bowlers kept Sri Lankan batters under constant pressure and the responsibility was on experienced Dinesh Chandimal and skipper Dasun Shanaka, who played an attacking knock in the second T20I, to bail out their team from a struggling situation.

The duo gave some impetus to Sri Lankan innings during their 31 runs partnership by hitting some occasional boundaries and rotating strikes well. Chandimal especially looked a bit more comfortable against Indians spinners and played some beautiful shots. However, Harshal Patel removed Chandimal to inflict further damage on Sri Lanka.

At 60-5 after 12.1 overs, it seemed like Sri Lanka won’t be able to bat for a full 20 overs but Dasun Shanaka had other plans. Continuing his superb batting form, Shanaka took matters on his own and played an counter-attacking knock, stitching an unbeaten 86-run stand with Karunaratne.

And even in that stand, Shanaka was the aggressor because Karunaratne (12 off 19) hardly timed a ball. Overall, Sri Lanka made a remarkable recovery and posted a challenging total of 146/5 in 20 overs. 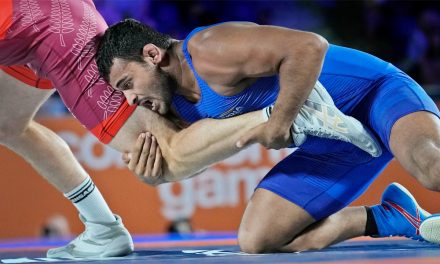 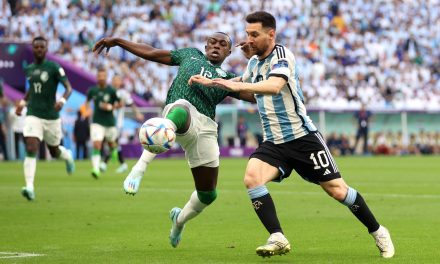 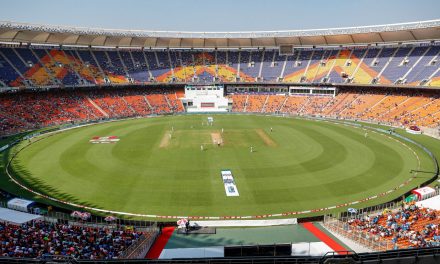 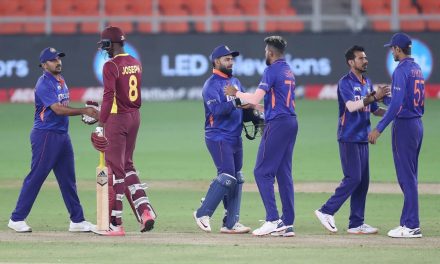